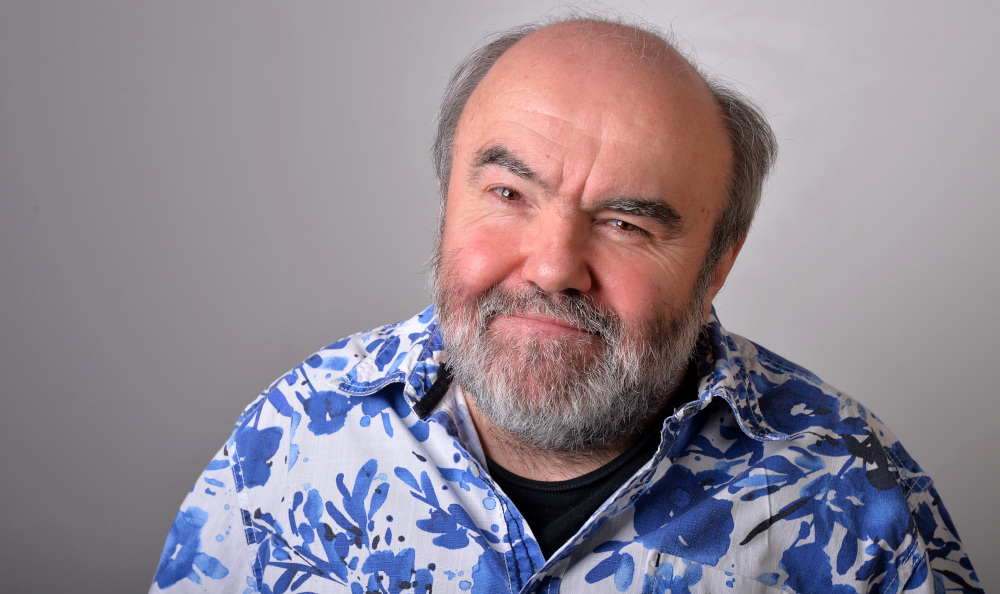 Comedy writer, performer and director Andy Hamilton is coming to Wimbledon BookFest this month with his new novel Longhand. The book is unusual – the clue is in the name in that he has written it, in its entirety, in longhand. For Andy, whose credits include Outnumbered, Drop the Dead Donkey, and Not the Nine O’Clock News, it is no different to how he normally works – shunning a computer for traditional pen and paper. But what is different is that, unlike his scripts which get typed up, the book has also been published in his handwriting.

It would seem an arduous process to write a whole novel this way. But for Andy, there is something relaxing about it. “There’s a kind of rhythm to it. The hard bit is working out what you want to write.”

The plot centres on a man with a secret identity, with his story revealed as a farewell letter to his partner, so the handwritten format is entirely fitting. Says Andy: “First and foremost, I hope readers come away thinking it’s a really good story with good characters that addresses really interesting themes. But I’m also hoping they enjoy the experience of it, and that it might feel a bit more intimate and personal. I think when you read handwriting you sense the physicality of it a bit more.”

Fortunately, Andy’s handwriting is beautiful and legible. But it also contains authentic crossings out, which only adds to the feeling that you are reading an actual letter, albeit a longer one than usual. “It’s 349 pages, and probably there’s only about one page in 10 that is exactly as it started out. I think I rewrote nine out of 10 pages, so I likely did about 3000 manuscript pages!”

As well as avoiding writing on a computer, Andy famously shuns mobile phones and the Internet. But he insists he is not a luddite. “If I go away, and I’m going to be filming in a remote location, I’ll use a mobile. So yes in extremis I’ll use one! But not normally. My job isn’t an important job. It’s not as if I need to be there to save lives. And I just like to have the brain space you get when you don’t have one.”

“As for computers, my problem is my typing speed is so slow. And it’s never got up to my handwriting speed. I do use digital technology. But when I’m editing a TV programme, there is someone there working the controls for me and so I’m a bit of a throwback in some regards. The likes of Zoom was brilliant during lockdown to stay in touch with relatives who we wouldn’t have been able to see. So, I’m not anti technology. I’m just someone who chooses when possible not to engage with it.”

It’s also a local venue for him, as he lives in Wimbledon Park. He grew up in Fulham and has pretty much stayed south of the river. He initially settled on Southfields after looking in a London A-Z. “My wife Libby and I were in a small flat in Notting Hill with our first child and we wanted to move somewhere with plenty of parks and open space so we picked up a coloured copy of the A-Z and picked an area with lots of green on it! There’s so much around here with Wimbledon Common and Putney Heath. And when the kids were little we’d take them to Wimbledon Park to the lake and playground.”

He also loves getting the District Line back home from central London. ” I like seeing the houses as you go by. And I’ve always found it gives me a little bit of thinking time and a  time to daydream and think of ideas. I also like watching that sort of tidal flow of humanity going in and out in the mornings and evenings.”

As a regular fixture on shows such as Have I Got News For You, do people approach him on the Tube wanting to chat? “A few people do come over, but everyone’s really nice. They only have friendly things to say so that’s alright. That’s a very pleasant experience!”

As for what’s next, Andy Hamilton doesn’t have any longing ambitions to fulfil. He says his proudest career moment was when his heroes Galton and Simpson, who wrote Steptoe and Son and worked with Tony Hancock, name checked him when asked which modern comedy writers they liked.

“I just want to keep doing more of the same really – being able to do more mad ideas, to carry on working and to keep trying new things.”

Read more about what’s on at the Wimbledon BookFest this month: www.timeandleisure.co.uk/wimbledon-bookfest/ The Psychology of Weight Loss