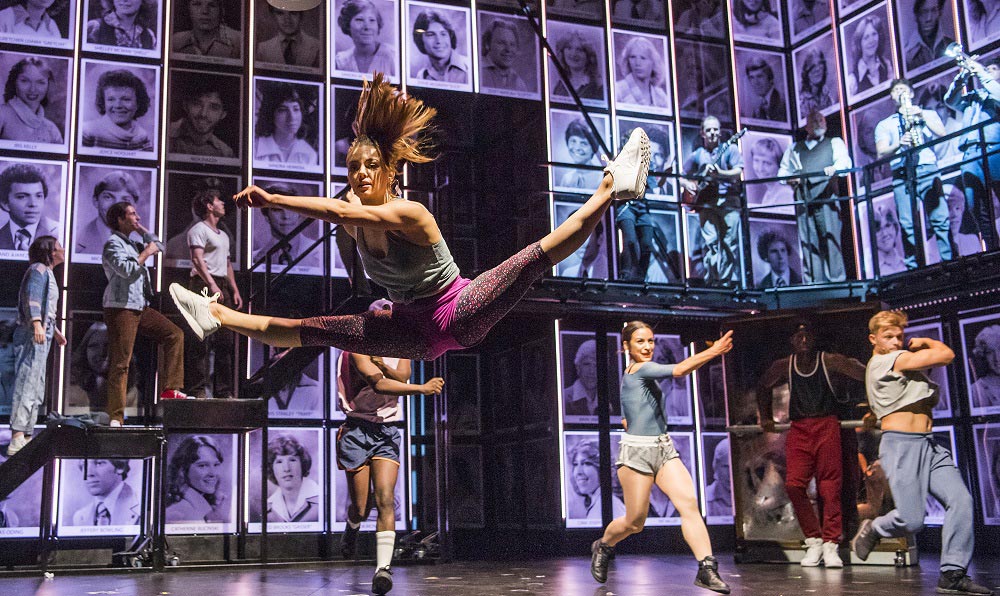 We speak to the stars of upcoming New Wimbledon Theatre musical, Fame

Based on the 1980 pop culture film, Fame The Musical is set to make waves at New Wimbledon Theatre next month with its uplifting dance routines, outstanding score, and brilliant performances from the likes of Keith Jack and Hollyoaks star, Jorgie Porter.

Jorgie will be covering new ground with her first role on the stage, although she will be right at home starring in Fame The Musical. “It’s a young girl’s life in the world of wanting to make it and be famous,” she says explaining her character, ballerina Iris Kelly, “It’s quite similar to what I went through!” she laughs.

“I spent three years in the Hammond Dance School in Chester dancing every day. You would be in the common room and there would be a trumpet going off and drums, and everyone would be singing. So this is literally like when I was 16-years-old. It’s really weird!” Fame made an impact on Jorgie from an early age. She remembers going to her local church for dance lessons as a tiny girl, and Fame was one of the tracks that left an indelible mark on her.

“Those lessons were where I found my love of dance,” she recalls, “I would jump up and do the star jumps at the beginning of Fame.” Jorgie is delighted to be working alongside such a talented cast: “They are incredible – so impressive. Many are fresh from graduating and learn so quickly. I’m actually one of the oldest, which is freaking me out!” she says with a giggle.

After a long association with Joseph and the Amazing Technicolor Dreamcoat, this is a chance for Keith to stretch his wings a little, staring alongside Jorgie. Keith is also relishing the thought of playing Nick Piazza in this modern classic. He says: “It’s a completely different role for me, for one I don’t wear a loincloth and I’m not topless, which is quite nice. I get to wear clothes! People will come along and expect something of me and see something slightly different.”

“Nick is an actor who started off doing a TV commercial, and became famous from doing younger stuff, but he wants to go away and train to become a ‘real actor’ to do Shakespeare, and not just be seen as ‘that TV boy,” Keith says, explaining his character.

“Fame shows every character’s individual story and how they have got through the three years at theatre school.”

“He finds interest in a girl called Serena and falls in love with her as the show goes on. He realises there is more to life than just books and learning, and sees that he can let himself go a bit with her. “She is a little bit quirkier than the average girl and doesn’t take herself too seriously and Nick finds that quite interesting. At the end of the show they may or may not get together – you’ll have to come and see to find out!” Nick isn’t the only one with a love interest in this story, and the script is bursting with colour and depth.

“Fame shows every character’s individual story and how they have got through the three years at theatre school. It is about how their characters have grown up, and how they link along the way.”

Like Jorgie, Keith feels a certain affinity for his character: “I got given a big opportunity doing the TV programme a few years ago and have spent the last 10 years working away doing loads of different shows, concerts and albums, to keep working and show that I’m a real actor and not some TV hack.

“When I came out of the programme it was hard to prove that I was good enough and that I was right for something. Very much a part of the character is the same as what I had to deal with.” Fame – The Musical is set in New York’s High School For the Performing Arts, which means that Keith has to swap his Scottish accent for a Stateside one. “I had an American accent for the last show I did in London, Forever Plaid. The more you do it, the better it becomes. I’ve got a few friends who are American so I ask them for advice, and I had a dialect coach during rehearsals to make sure it’s on point.

Since Any Dream Will Do, Keith has forged a great career as a singer (his many highlights include performing for Her Majesty the Queen, and At Andrew Lloyd Webber’s birthday concert) and on stage. And he has an ardent fan base that follows his every move. That’s one of the best things about having fame: “People come from all over the world to see shows that I’m in and it has been amazing to feel that appreciation and kindness from people,” Keith says.

So what can audiences expect? “Audiences will be on their feet at the end of the show having followed a massive journey,” Keith promises. “They will really feel the heart of this show, and obviously they will be singing the iconic number, Fame!”

Fame The Musical will be coming to New Wimbledon Theatre from 18 February – 23 February. Tickets will be available from £13.